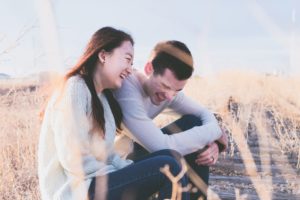 As a child, you find yourself laughing for no reason as you lay in the grass and watch the clouds go by. Years pass and you become more and more engrained into the outer world and its ways. Some individuals become so serious about life and their work that they almost don’t know how to laugh any more. Laughter is a natural reaction. When you find yourself becoming too serious, step back and look at the situation from a different perspective.

Laughter can be many things. For some, it is a release of pent-up energy that is wanting to be removed. For others, it is a means of escape from what may be uncomfortable to them. Laughter is much more than this. It keeps one out of the stress that mounts up. It also does another thing many are not aware of; it takes you to a higher vibration. It becomes a tool to remove you from the lower frequencies of energy and allows you to move to a higher place or space by removing the overwhelming feelings and releasing the lower energies.

Some individuals find themselves laughing when so many unsupportive situations begin to occur in their life. Others may see the person or his or her laughter as shocking or offensive in serious situations. The thought might be that the person is ‘losing it’ so to speak. The person is using one of his or her tools to remove oneself from the current situation and place himself or herself at a distance from the situation as if to say, “In the overall picture of things, this is not that important; I am giving it more energy than I should.”

So laughter is another tool to use, taking you to a better place than the stressful situation you currently face. While others find it strange, you will find it as a release of the stress or sadness that plagues one in the moment. Laughter is a natural reaction to balance an overload of energy in one of your bodies such as sadness in the emotional body.

Laughter is an important healing tool. When you are in a situation of lower energies and wish to raise the energy, laughter is one way. A Youtube video that stuck in my memory was one of a man getting on a train. Moments into the ride he begins to laugh, somewhat subtly at first to attract the attention of those in close proximity. The laughter continues to slowly increase in volume until all on the rail car notice, looking at each other in wonder. Another individual begins to laugh as it becomes contagious. Finally, everyone is laughing as the volume increases.

The train stops; more people get on while others get off. Laughter now becomes short bursts from individuals and many are smiling or snickering as if holding the laughter back. The suited gentleman has left the rail car and is clearly seen moments later through the window on another train. Many in the first train car begin to snicker and laugh as they see the suited man directly across from them on the other train.

Put more laughter into your life and lighten up your path along the way for yourself, for those around you and for those who follow.