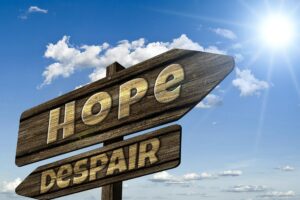 There are so many mixed messages going on in the world. With the increase in chaos comes an increase in depression, especially among the younger generation. How can one pull him or herself together enough to get over the depression?

When I first moved from California to New Mexico, nothing seemed to work. My daily guidance seemed to disappear. I did not know anyone to turn to when my body crashed coming off hormones and I was allergic to almost everything. There were many more challenges besides those that I had to confront. A new friend saw what was happening and assisted me by giving me a plan to overcome the depression.

This is the method Ann used to help me. First, I was to journal each morning about everything my husband and I went through with his cancer, side effects and how it affected my life. Journaling was something I had done since my teens and it had become part of my life. After getting through the grief, I was to journal on all the things that happened to me since moving to New Mexico.

The second thing was to write down five things I was grateful for on small pieces of paper, one on each sheet until I had a significant number of pieces of paper in the basket on my table. This was a challenge since I had never thought about it before and could not imagine much of anything to be grateful for then. Start with the things you take for granted, such as you woke up this morning or note the beauty of a flower. I sat at the kitchen table until there were five folded small papers placed in a basket on the table. This was to be done daily. When I felt really down, I was to remove one and read it. If needed, I was to continue. There were many days all the notes had been read more than once.

The third thing was to move the body. Walk, working out or whatever I could find to do.

I used all three of the above steps. The journaling brought me full circle back to me; that was how I knew I was done. The five pieces of paper, each having a gratitude became a routine of saying them in my morning prayers rather than writing and the third item is an ongoing practice.