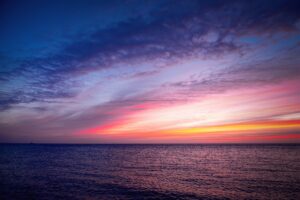 An example of this would be a situation that happened when I was living in California. A couple visited me from the mid west and wanted to see as much as possible for the length of their stay. It was their last full day before leaving and they wanted to see the sunset over the ocean.

We were inland for the early part of the day and as we tried to get to the main freeway along the ocean; traffic was backed up. By the time we got to the ocean and to the place for the best view, the sunset was sinking in the distance. So they left the next morning disappointed.

Months later I was with a girlfriend and told her the story. We stopped at the perfect place to enjoy the sunset. We decided to send the sun setting to him. We sat there as if in meditation, sending it as we chose to.

After talking to my friend in the mid west, I asked him if he saw the sunset on that specific day and time. He said yes. He wondered what was going on. I told him my girlfriend encapsulated it all in a balloon. His answer was, “no”. He did not experience it that way. I told him that I gave him permission to see through my eyes. He said that made more sense to him.

Another example would be when I and several friends traveled to Pasadena, California to see Gurumaya. We sat about half way down in a big auditorium. Gurumaya first talked about how she could see the souls across the audience and how beautiful we were. She stated that she wished we could see what she was seeing.

I mentally asked to see what Gurumaya was seeing from the stage. Immediately, it was like I was on the stage, looking through her eyes. I could see the different levels and density of light across the audience. It was so beautiful to see.