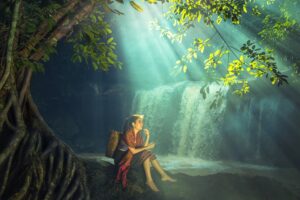 The energy lately has been exhausting. We are in Mercury retrograde as well. It is a good time to rest and put some joy in your life. It might be a good time to also release some of your karma or stuff that needs to be released.

You have been told that when you move into the fifth dimension, you cannot take anything with you. Most individuals think that means you have to leave all your physical belongings. It means much more than that. You must also clear any cellular memory that is stuck in your cells.

When I first started releasing such cellular memories, I could not wear short necklaces such as a choker and I could not button the top button or two of a blouse. Anything around my neck bothered me. As a clairvoyant, I started seeing past lifetimes and the traumas and dramas left behind. It was then that I realized I had been hung in a lifetime which left the memory of trauma of being hung in the cells around my neck. Once it was released, it was replaced with light. It made sense that we are moving into our light bodies and to do so, we must release everything that is stuck at the cellular level.

Be kind to yourself and allow what comes up to be released, be released. The energies at this time give you an opportunity. Do not try to hang on to past energies by grabbing on to them. Tell yourself that that was then and let it go by. Be in the present where you can change your future. Look for joy and create. Be in nature and enjoy her beauty.