Home dimensions Lady: Here and There

Lady: Here and There 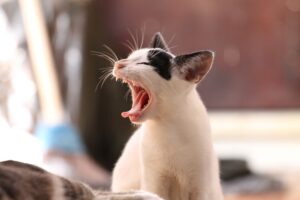 Lady was a Siamese Ragdoll runt unable to be sold by her breeders who were moving. She was given to my neighbor who wanted me to take her in since she always came to my door and he was unable to care for her.

Both of my cats, Cy and Lady, made the trip with me to New Mexico. Within the first year, Cy had to be put down. After that, Lady and I moved into my current home. One would never have known she missed Cy so much since they were always fighting. In the morning, the first one to leave my bed was pounced on by the other cat from the bed. It was a rare occasion for Lady to play after Cy died.

At night, she was locked in my bedroom until I arose in the morning. The only room off limits to her was the spare bedroom where she liked to crawl up under the netting covering the box spring. At night, I usually opened the spare bedroom door to air the room out.

One night after getting into bed, I realized there was no water bottle on the night stand for me. Thinking Lady was under my bed where she often liked to hide and carefully closing my bedroom door, I began walking down to the corner of the hallway where the spare bedroom was. About half way there, I witnessed Lady, as if outlined in a hazy white light, turning into the spare bedroom. How did she get out of my bedroom? I decided to look for her after getting my water. Passing the spare bedroom, I noted the door was closed.

After putting the water bottle on the nightstand, I saw Lady asleep in my bedroom. What I had witnessed was Lady bi-locating. How many times had she done this before? All of my cats had enjoyed hiding in the box springs. Had any of them bi-located also?

There are many worlds or dimensions around us here on Earth. There are many mysteries and what we call miracles because we do not yet understand them and the universal laws that must be followed.