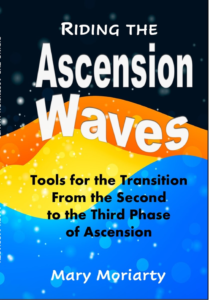 My latest book, Riding the Ascension Waves, Tools for the Transition from the Second to the Third Phase of Ascension, is now available on Amazon as an e-book and in paperback form.

Here are a few questions this book addresses:

What is the easiest path for moving forward into the fifth dimension? There are many paths you could choose to take. It does not matter what path you are on, for this book gives you the common experiences covering all paths. This book addresses each of them and gives you more than one way to overcome each situation as you take your power back.

Mary has chosen the path of love; the easiest and most traveled path. Earth’s current plan is to move into the fifth dimension, the lowest dimension of divinity. If you plan to continue on the earth plane, then you too must move into the fifth dimension along with all of Earth’s residents. This includes humans, animals, plants and anything else that exists on Earth. Our ascension is very important to the universe and our solar system.

Why does the ascension play such an important part in the universe? Earth is in the lowest dimension in our solar system while other planets in our system are in the fifth dimension or higher. In order for the other planets to move forward on their upward path, the lowest planet, Earth, must first move forward into the fifth dimension. This means we are moving two dimensions forward; something that has never been done before. To move forward, Earth must clear the planet and the area around the Earth, the astral planes.

The archangels and Sri Yukteswar, Yogananda’s guru, lay out the process and the easiest path to the fifth dimension. Their co-author, Mary Moriarty, shares her experiences and the tools she used along the path. Riding the Ascension Waves takes you from phase one where the problem is addressed, through phase two which prepares you for next two phases. There is one other advantage of reading this book. It encodes and activates six strands of your DNA, opening doors to the higher dimensions. According to Archangel Michael, the material is at an 11:11 frequency and higher.

For more information or to order the book on Amazon,  CLICK HERE.