Home Your Gifts The Perfect Game 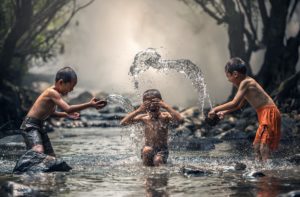 It was another perfect day for the young one. The only thing missing was having friends to play with. As he held the thought of others around him with varying personalities and traits, the images were created from his mind.

Life became more joyful and filled with laughter until one day he decided to create a game. That was when the game of hide and go seek began. At first, it was fun hiding behind the trees in the forest previously created and then in crevices and caves in the mountains. After awhile, it became too easy to find all of his playmates and he wanted to find the ultimate hiding place. It was then when he thought what better way could there be but to hide within one of his creations.

After much thinking, he realized it would be too easy for the others to notice a difference with the one in which he hid. Instead, he decided to place a part of himself within every one of his creations and reside within the universes created within each of them.

This would take them lifetimes before they discovered where the creator resided and still resides, waiting for each of us to discover our inner world and where our creator is within and all the gifts of inheritance that left a trail for us.

Have you found your creator within or all of your gifts freely given to you? The game of life becomes easier when you look within, discover your gifts and how to use them. What is outside of us is also within. You are the ruler of your world. What did you create for yourself? Notice the beauty around and within you. What did you create to assist you in learning your lessons?